“I’d rather be lucky than smart!” This hackneyed adage is usually delivered sarcastically, in response to someone who just won the lottery, got the big promotion, or left the casino with a pile of cash. The implication is that, if one is lucky, working hard and taking risks is unnecessary. Just wait, and good fortune will come along. If one is unlucky, then industry and risk-taking is all for naught. It’s a philosophy that can lead to nihilism and despair quite quickly.

So, what is luck? It is undeniable that good things seem to happen for no perceivable reason, as do adverse events. For millennia, people have attributed such things to supernatural causes, and have attempted to control them by propitiation of gods, or by seeking talismans that will grant them that nebulous quality called luck. Others believe that the universe is fundamentally random, and that luck is largely a matter of perception. Of course, it’s easier to take the latter view if one is lucky…

The concept of luck has been a fruitful subject for science fiction. Larry Niven explored it in his Known Space stories, in which an alien race actually tried to breed lucky humans by providing incentives for lucky people to mate with each other. J.K. Rowling, the fantastically successful author of the Harry Potter novels, created a magical potion that conferred good fortune on the imbiber, leading one to wonder if she consumed some herself.

The geologist David Waltham has written a book called Lucky Planet, which will be published later this year. The thesis of Lucky Planet is that the earth, due to a highly improbable series of weather patterns, experienced conditions amenable to the genesis of intelligent life. This supports the Rare Earth Hypothesis, which is a possible explanation of why we have not observed any other intelligent life in our universe.

In 2009, NASA deployed the Kepler telescope, whose mission was to search for extrasolar planets in the habitable zone of their parent solar system. To date, NASA scientists have confirmed 961 planets discovered by Kepler, and have extrapolated those results to estimate that the number of earthlike planets in the Milky Way galaxy is likely tens of billions. Estimates of the number of galaxies in the observable universe run into the hundreds of billions.

So, while the earth may indeed be a lucky planet, it doesn’t seem likely we’re alone in the universe. Do the math. 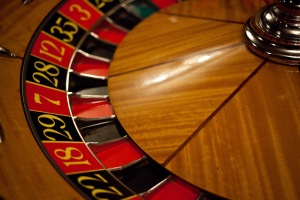 As a kid, Tom started reading mysteries with the Hardy Boys, Ken Holt and Rick Brant, and graduated to the classic stories by authors such as A. Conan Doyle, , John Dickson Carr, Erle Stanley Gardner and Rex Stout, to name a few. Tom has written fiction as a hobby all of his life, starting in marble-backed copybooks in grade school. He built a career as a writer, doing technical writing, science writing and editing for nearly thirty years in industry and government. Now that he's truly on his own as a freelance science writer and editor, he's excited to publish his own mystery series as well, the Natalie McMasters Mysteries. Follow Tom on Facebook at https://www.facebook.com/3MDetectiveAgency/, on Twitter @3Mdetective or email him at tom@3mdetectiveagency.com to get all the news about Nattie and the 3M gang, as well as Tom's other writing projects.
View all posts by Tom Burns →
This entry was posted in Science and tagged David Waltham, extrasolar planets, Extraterrestrial life, gambler's fallacy, Harry Potter, J.K. Rowling, Kepler telescope, known space, Larry Niven, Law of Large Numbers, Lucky Planet, NASA, National Aeronautics and Space Administration, rare earth hypothesis. Bookmark the permalink.

1 Response to Are We Lucky?

Living and Writing in the great state of Maine

Chicks on the Case

Mystery writers with a killer sense of humor.

3 no 7 presents "Looks at Books" with Katie and Barbara

a quirky, sideways look at life in the lab

Because reality is stranger than fiction.